a love letter to internet friends

in an era which increasingly gives the impression of connecting people around the world thanks to social media, i often can’t help but wax poetic of the days before the facebook like button. when i say that, i mean i long for a time when you’d actually have to use words and string together a sentence to express affection for someone, or someone’s ideas, online. or hell, let’s not stop there! i know i’m not alone in finding myself longing for the days before facebook, before 140 character limits… we could go on and on, tracing back to myspace-friendster-livejournal-message boards-chat rooms all the way back to the days of chain letters and pen pals. personally, i like to think i’ve kept a relatively healthy mix over the years, keeping my favourite old fashioned traditions alive alongside the latest, greatest social technology innovation.

we don’t call it “social media” for nothin’. while most would think of twitter and facebook as the first time we began to have online access to people they already knew in “the real world,” more seasoned internauts like myself know that there were online communities long before that. finding that balance between mediating (and valuing) online relationships alongside the ‘real’ ones has sometimes meant breaking “the fourth wall” and shifting some of those internet friendships into face-to-face ones. a little known fact (in our “real life” circles) is that i met one of my dearest friends, iris, via livejournal, and knew each other online for probably a good year before we had the chance to meet. and that’s when we lived in the same town!

there are countless examples of friendships that would have never had the chance to exist had it not been for these newfangled technologies. when i travelled to mexico city in july 2010, i told my friends online and asked for recommendations of what i should see and do. teresa, a livejournal friend who has lived there for the better part of her life, suggested we meet up and warmly welcomed me to the city she calls home. i’m also more than thrilled to be meeting one of my longest online friends, andrea, when she comes to visit canada this fall.

but of course, travel budgets remain limited and the fact that many of my favourite people live all around the world will hinder those ambitions. not to mention that not every online friendship can – or should – become a face to face one.

until there’s teleportation, though, there remains the good old fashioned postal service.

there’s something overwhelmingly wonderful – and slightly surreal – about internet friendships that make jump from digital screens to the more tactile “real” world. when short emails and comments evolve into exchanging bonafide letters in the mail, or even sharing things we’ve made especially for each other. yes, an 8tracks mix can be quite convenient, but i will never be as fond of a playlist on something i have to log into as i will be of a handmade mix cd, with a specially selected cover made just for me, the sharpie ink scrawled in unfamiliar handwriting.

this winter i had more than a few lovely people i affectionately refer to as “internet friends” cross that line, in the best possible of ways.

i can’t recall when emily and i crossed the line from mutual online admiration from afar to full-fledged internet friendship, but it’s been a while. i first came across her music selections shared on tumblr, paired with beautiful found photographs always sourced back to various beautiful flickr accounts.

i fell in love with some new voices, learned everything i know about gospel hymns, and definitely let my imagination carry me away trying to imagine who was behind the blog. an old grey-haired, spectacled archivist who spends his day pushing paper and longing for the days of the dewey decimal system, but sharing his true love of the music he grew up listening to online? or perhaps someone closer to my age, and more closely resembling me: just sharing what they love online in their spare time.

in the end, it turns out it was closer to the latter. after a while my curiosity got the best of me, and i asked her for her personal tumblr and now we’re friends on facebook, follow each other on twitter & 8tracks. she used to live in ottawa, around the same time i visited often since an old lover’s family lived there. i’m sure we haunted the same vintage shops and bookstores. recently, she opened an etsy store and i fawned over so many of the beautiful dresses. when one showed up in my size, i sent her a message letting her know i wanted to buy it. emily, the thoughtful soul, surprised me with it as a gift! not only a vintage dress, but with a wonderful letter and mix cd.

the dress from emily's etsy shop "the patsy" paired with my spats!

a lot of what emily had to say in the letter reminded me of this post, “rescuing garments and the history of clothes,” about an etsy store which placed a fair amount of emphasis on the stories behind the vintage dresses they sold.

receiving emily’s package coincided with another piece of mail i had been waiting for: a package from another precious internet friend, mccall. mccall and i have a very long and storied internet friendship. i vividly remember the start: i shared a polaroid in a livejournal polaroid community, and paired it with lyrics to a cocorosie song. she told me she liked it, and added me as a livejournal friend. we were both active members in fashion, photobooth, and polaroid livejournal communities and actively commented on each other’s posts over the years. 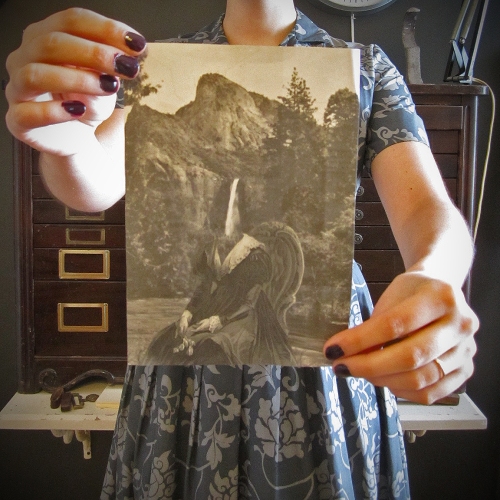 i’ve see her hair long, short, i’ve followed her friendships and loved the way she wrote about sylvan, shares her beautiful stories, photographs, drawings, and collages. any way i try to write about our relationship fails to do it justice, but suffice to say we were long overdue to share tactile things with each other.

the overwhelming sense i got from both of these gifts was the equal parts comforting and unnerving feeling that these people truly knew me. whether that is an illusion or not might never be shattered, and that’s okay. it’s something i’ve been conversing with friends about lately, over the pros and cons of sharing your life with strangers online – most remain strangers, but convince themselves that they do know you based on what you chose to share online. that is a whole other can of worms altogether, but definitely something i’ve been thinking about more and more these days.

there are countless people whose blogs i follow who i once shared quite intimate online moments with, largely thanks to more private “locked” options. over the years, i witnessed people thousands of miles away from me change and grow, and i revelled in the privilege of being given permission to come along for part of the ride, albeit in a passive role.

moving from our online journals and diaries to very public blogs has often meant severing a lot of those older internet friendships – intentionally or not. some of us have outgrown the novelty of sharing our lives with strangers online, and disappeared without a trace. but most of us will continue to use the internet in some way, shape, or form to share our lives, our stories, our art and our work. 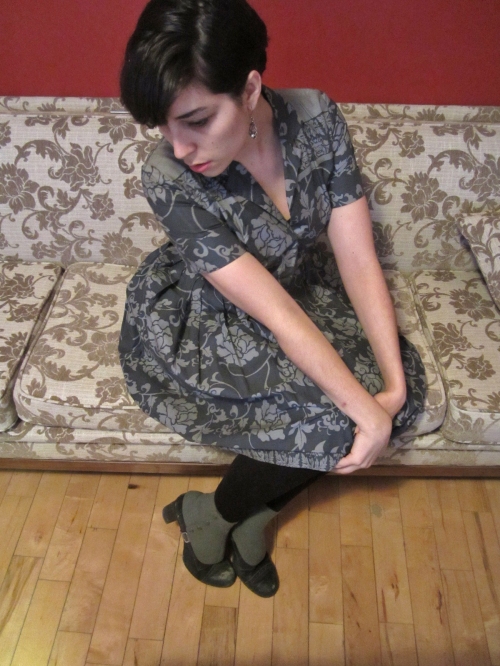 in my case, i feel like my life is so much richer and fuller because of some of the incredible people i had the chance to get to know online. as grateful i am for my “real life” friendships, some interests that couldn’t really have been fostered otherwise flourished online. wherever i was, as long as i had an internet connection i had a community at my fingertips.

they were some of the people who encouraged me most in all different kinds of my endeavors, both “real life” and online. people who have my blog featured on their blog roll, or who’ll mention me in interviews. i think back to the time a still-unknown stranger sent me many thoughtful gifts when i had been elected editor of my university paper. i’ll always remember the mix cds and postcards people from new york, australia, and portugal sent me when i was lonely and heartbroken in the summer of 2007.

so consider this only part of my love letter to you, the digital part.

olivia, i know i still owe you a decent thank you after that gorgeous letter you sent me last winter.

amber, i’ve got a package and long-overdue letter sitting on my desk begging to be stamped and mailed to you, not to mention hopes of a montreal visit this summer.

meredith, i know upstate new york and quebec city aren’t as far as we make it seem.

and if we haven’t met yet, (i’m looking at you maddie) we both know that an opportunity will present itself sooner or later.

and if it doesn’t?

12 responses to “a love letter to internet friends”