i’ll be the first to admit, i’ve fallen off the wagon. i promised myself i wouldn’t become one of those bloggers who starts off every blog post by apologizing about how they haven’t been blogging lately… but looky here. i have valid excuses, however. i’ve been working full-time (researching, writing, and reporting for a local radio station that i love) and i’ve let myself get wrapped up in it. not to mention a whole bunch of other summer adventures i won’t mention quite yet.

poster by flexib, for the “something from the meatcase, linda?” tour

since i last posted, my life has changed a whole lot; namely for the good. scratch that, namely for the exceptional. august brought nearly everyone i hold near and dear to me to one of my favourite places in the world. i caught up with old friends, the wonderful salima and helped throw together an event for the amazing karol who was on tour with a bunch of friend. two of my best friends in québec city moved to greener pastures (guelph and yarmouth, respectively), and i’m starting to miss them lots. hurricane irene hit me surprisingly hard, breaking my camera and ripping the electrical wiring out of my house. eleven days without power helps put things into perspective, let me tell you. not to mention, since i last posted i’ve lopped off 14 inches of hair and gotten a new pair of specs. i’ve got a lot of thoughts i want to put to paper (what’s new?!) but in the meantime i felt like i should assure you the dead air is not a bad thing. it means things are good.

without further ado, here’s some photos of how i look these days!

– slip worn as a dress thrifted from emmaüs, 5$
– vintage (deadstock) blue cardigan, free from le vestiaire. i would bestow upon it the title of BEST cardigan ever if only it had pockets. it’s got these great scallopped edges
– new glasses from clearly contacts which set me back a whole 10$. best sale ever. 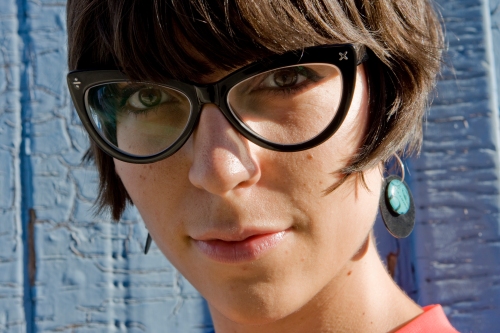 earrings by anne-louise laflamme snatched at le coeur de loup flea market. i’ve always enjoyed her designs but it wasn’t until i spotted her latest record ones that i found a pair i felt suited me to a t. similar ones here. 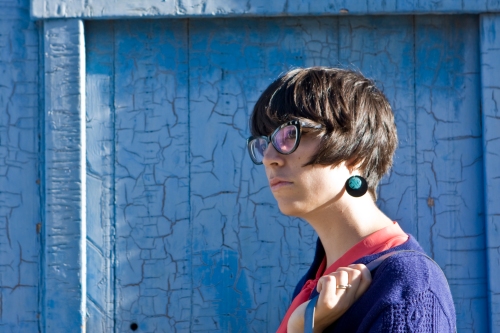 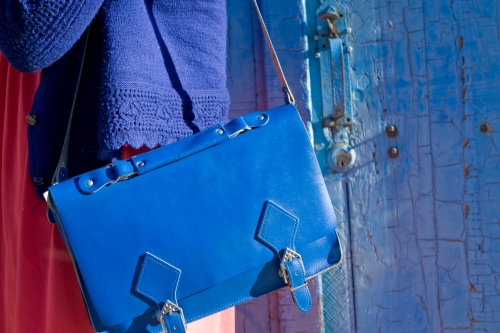 bag thrifted from value village in ste foy, summer 07. if only i had one in every colour of the rainbow!

the buttons are both gifts from wonderful friends: typewriter from karina and hand reading pin from sves.

Filed under hair, vintage, what i wore today

i expected a lot of things when i moved to québec city. among them included: longer winters, lots and lots of french, gorgeous centuries-old trees in the middle of an historic city, a harsher job climate for a semi-bilingual person such as myself.

two and a half years later, i am now fluent in french (only have a slight accent and make fewer and fewer mistakes) but still forget some québécois cultural standards. around this time of year, i’m reminded of the little things that add up: st-jean baptiste as “la fête nationale” on june 24th, everyone getting a day off. also, that july 1st is moving day in this gorgeous province, not “canada day” as it is known in the rest of the country.

one thing i hadn’t been told about (and hadn’t even thought about) was that québec is a very anti-monarchist/royalist city.

in early june, i was reminded of this fact when i saw these posters popping up around my neighbourhood. the posters read “William dégage!” (William, go away!) and feature an image of a married couple sitting atop a crown. information about where to protest was featured prominently below, and all were welcomed to join.

if you had your television/radio/internet turned off in early july, you may be wondering, william who? but if you’re canadian and consume mainstream media, you’ve most likely been aware that the “royal couple” had a 9-day visit to canada and continued with a short trip to the united states. and if you live in the province of québec, you probably know about that bunch of people weren’t very happy that the royal couple was in their neck of the woods.

when it was announced that the royal couple would not only visit Ottawa, the symbolic nation’s capital on Canada Day, but also Québec, Prince Edward Island, Yellowknife and Calgary, reaction in Québec was swift. a member of the national assembly, Amir Khadir, pointed out the absurdity of paying millions of (tax-payer) dollars for non-elected officials to basically have a fully paid honeymoon across the country. he even went so far as to call them “parasites” and was one of few public figures to publicly question the role that the British royal family plays in Canadian politics. a small group of separatists, the Réseau de Résistance Du Québec planned to protest their visit (but really, kate and will shouldn’t take it personally, as this has happened many times before).

so, what does this have to do with fashion? at first glance it would seem like not a whole lot. but when we scratch the surface, an interesting picture emerges. here’s where “hats for kate” come in:

What does a stylish British princess wear when visiting Canada? It’s been 20 years since the last royal visit to Canada by William’s parents, and while much remains the same, a lot has changed. To help relate to Kate’s first official royal destination, we commissioned hatmakers to design high fashion ‘Canadian’ hats for Kate. Because we all love hats!

sounds innocuous enough, right? let’s take a look at some of their creations:

the maple beatrice and the road to avonlea, okay! yeah, those might work…

oh, but wait… what’s this? Tar and Feather? To mark the day Canada achieved infamy when a flock of ducks mistook a massive toxic lake in the tar sands for a good place to land… and Bully the Beaver? Canadians are polite, eh? Well, lately, not so much. In fact, from lobbying against EU fuel standards to hindering international climate talks, Canadians are getting downright nasty defending the oil industry.

okay, so perhaps this isn’t just a genuine bunch of milliners trying to get a famous face to wear their goods… but their convincing kate middleton doppleganger might lead us to believe otherwise. hats for kate is hoping to draw attention to the fact that canada’s environment record has gone drastically downhill in the 20 years since the last royal couple visited. they’re also drawing links between UK companies that drill for oil in the Alberta Tar Sands. but with this witty and subversive activist campaign, not only are they sending up the tradition that british royalty have a fondness for hats, they’re calling attention to the fact that, chances are, the mainstream media would write ad nauseum about what kate middleton decided to wear… without ever actually talking about the relationship the UK has to Canada (historically or today).

you might wonder, what does a fashion lover (albeit a critical one) like myself have against talking about a woman’s fashion choices? as i’ve talked about before in my article about red carpet culture, situations like these fuel the illusion that what a celebrity wears somehow gives you an idea of what kind of person they are, and can serve to render them more accessible (or more elite, depending on the desired result). in this case, we are talking about what a rich privileged woman is encouraged to wear, based on politics, neutrality, and of course a team of stylists. the way the media talks about her “clothing choices” propagates the illusion that everyone can look/dress as nicely as celebrities and royality.

but back to hats for kate: what a campaign like this one does effectively is use the royal couple’s recent wedding and tourism adventures around north america as an opportunity to call into the question the complicated relationship between the UK and Canada. unfortunately, across mainstream media outlets, all we heard about in regards to the royal visit was the rantings of celebrity-style accounts from crowd members. when asked why they waited in the rain for hours, the response was more often than not “i just wanted to see them in real life, i only see them on tv.” when journalists held the microphone themselves, they often referred to the “special” relationship the UK has with Canada – the words “former colony” or “British empire” were completely absent.

but now that the royal couple have left canada and the dust has settled, i feel comfortable enough passing a few judgements. Kai Nagata hits the nail on the head with this commentary on what he calls the “Kate and Will Show”:

Wall-to-wall, breaking-news coverage of a stage-managed, spoon-fed celebrity visit, justified by the couple’s symbolic relationship to a former colony, codified in a document most Canadians have never read (and one province has never signed). On a weekend where there was real news happening in Bangkok, Misrata, Athens, Washington, and around the world, what we saw instead was a breathless gaggle of normally credible journalists, gushing in live hit after live hit about how the prince is young and his wife is pretty.

what did canadians learn during the royal couple’s 9-day, $1.4 million dollar visit? what did we hear, over and over and over? oh, they are young! they are handsome! they are nice to look at! the prince landed a helicopter (which you can see here in this incredibly boring video) and kate wore this, this, and this. we hear what the prince did and said, and we hear about how the princess looked.

as always, we see (hypergendered, heteronormative, active=male, passive=female) stereotypes at play in the coverage of the royal visit. we talk about what prince william has to say and do, and we talk about what kate middleton wore. what i find most amusing is that the people behind Hats for Kate had the foresight to know that this is what the media coverage would look like when they put together their subversive campaign. unfortunately i didn’t see it picked up anywhere other than social media networks like twitter and facebook.

in the end, honestly? part of me feels contradictory in even writing about the royal visit; personally i don’t give a rat’s ass about the monarchy, to the point where i like to pretend they don’t even exist (blissful ignorance?). but perhaps when someone types “kate middleton honeymoon visit fashion” they’ll stumble upon this little piece of critical thought and think a bit differently next time round. or hey, it could inspire future activist campaigns. who knows.