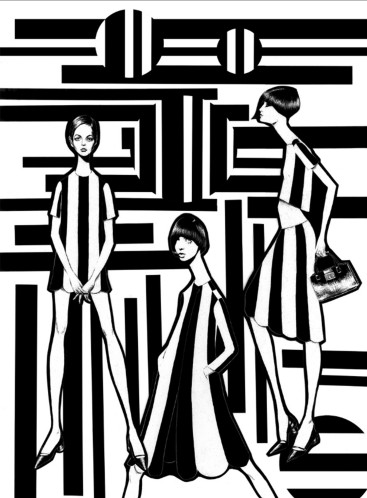 I’ve been wearing the bob for almost a decade now (with a handful of interludes and infidelities). Originally, the printed out images I would bring to the hairdresser would be those of flappers and silent film stars I had seen dancing the screen and longed to emulate. Lately, however, I’ve been finding myself captivated by the 1960s bob. Ironic, in a sense, since a large part of the resurgence of women wearing their hair in short, cropped bobs in the 1960s was a new spin inspired by those very same newly liberated young garçonnes of the 1920s, four decades prior.

When it comes to haircuts, I’m not only lazy but a cheapskate. The idea of shelling out 40 or 50 bucks every six-to-eight weeks for “upkeep” is laughable to me and my budget, as much as I enjoy getting my hair cut. When I lived in bigger (read: queer-er) cities, it was also much easier to rope friends into trimming my bangs, or even getting them to cut my hair in exchange for a case of beer. Low-maintenance is the name of the game for me, and I often let my haircuts grow out longer than I like or ever intended to. In 2011, when I donated 12 inches of my hair, so many people asked me how I did it – how I grew my hair out that long. A simple combination of moving to a new city and not having a hairstylist, being broke, and indecisively lazy. Huzzah! Three years later, 12-14 inches of hair to donate.

But I’m not interested in having hair past my shoulders any time again soon. My last haircut was this past December, and as I have for the past few years, I brought in a photo of Louise Brooks to show the hairdresser. 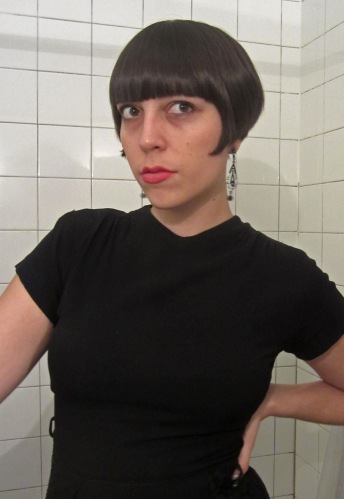 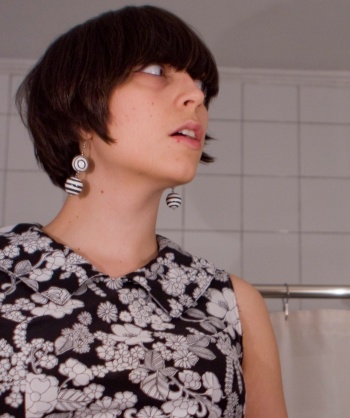 A slightly overgrown bob. Now that I’m getting into “bangs over my eyes” territory, and pondering making an appointment with the hairdresser, I can’t help but wonder… is it time for me to go full-on 1960s? 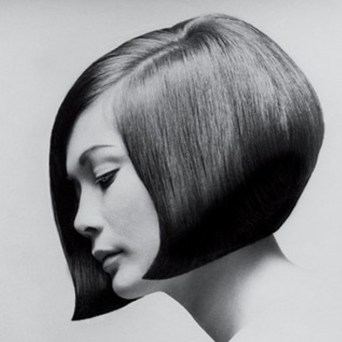 Am I patient enough to let it grow out a bit more, and go for Nancy Kwan’s gorgeous bob circa 1963? Or finally give in to my affection for Mary Quant’s 5-point bob? Or Peggy Moffitt’s iconic close-crop? 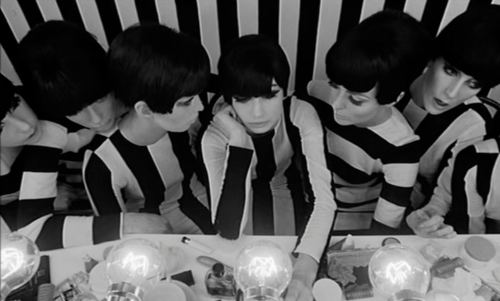 The films I’ve been watching these days are partly to blame for all of these haircuts dancing in my head. All of these visual references are namely from having recently re-watched Qui êtes-vous, Polly Maggoo ? (1966, William Klein) and a perennial favourite/criminally underrated Québécois film, Le Chat dans le Sac (1964, Gilles Groulx). Both thrilled me, and reminded me why I have such affection for style and art from this period – so much was new, so much was made possible in such a short period of time, the radical potential for renewal was everything.

I also finally bit the bullet this past February and watched the documentary on Vidal Sassoon. Fastforward about 30 minutes in, watch the bit with Mary Quant, and at about 46 minutes listen to this bit by Professor Caroline Cox (one of the very few female voices in the documentary):

When you saw somebody dressed in a Quant outfit with a 5-point Sassoon haircut, you didn’t know if they were a countess, you didn’t know if they were someone who worked in a shop. That really dramatically changed how people thought about Britain. It was no longer this hide-bound, class-oriented society and also it really changed how women thought about themselves, because women weren’t only liberated socially and sexually in the 1960s, they were also liberated through their clothes and very particularly their haircuts. They were no longer having to go to the salons every week to have their hair permed and set, tweaked and backcombed… they could have a haircut that they could go out, wash once or twice a week, do it all at home, and it would look fantastic!

This is the parallel I find striking between the 1920s and 1960s bobs: how something as simple as a haircut can change the way we think about things we often see as set in stone, like class and gender. The immediate post-war years, following both the Great War (1914-1918) and the Second World War (1939-1945), lead to stricter moral gender codes. During the wars, women often had no choice but to find work to support their families, whether they wanted to or not. But when men returned home from the war, women were simply expected to go quietly back to their previous roles as mothers, wives, and sisters. The way that resistance to these ideas presented itself could sometimes be in the subtle form of slowly shortening hemlines, more comfortable clothing (re: clothing one could move, work, and exhert oneself whilst wearing) and simpler hairstyles.

And by “simpler,” I mean hairstyles that did not require the assistance of someone else, with the use of products and tools only in the possession of the live-in hired help or the professional barber. The gender and class dynamics that could change partly as a result of this were astounding.

While researching hairstyles of the mid-1960s, I couldn’t help but be reminded of those from the mid-1920s. The moral outcry about an attack on femininity, the fashion designers who collaborated with hairstylists to push an androgynous agenda forward, is equal parts laughable and terrifying. All because of a snip of the scissors…

But back to the movie the quote came from: I must emphasize – this is pretty much the only part of the Vidal Sassoon documentary I found refreshing or interesting. Watch it at your own peril. I would summarize it succinctly as a myth-making circle jerk of a bunch of old white guys putting Vidal on a pedestal shortly before his death. So many choices struck me as so wrong! Using Miles Davis’ Kind of Blue (1959) to illustrate how modern and cutting edge Peggy Moffitt’s fashion poses in the mid-1960s were? I’m a fan of both, but no. Not to mention my distaste for using faux-vintage footage in something presented as a documentary. Bad. Poor form. And how many times do we have to counter the myth that Sassoon was responsible for Mia Farrow’s pixie cut? Listen to the woman herself!

Glad that’s out of my system.

After looking up all these images of 1960s models, I couldn’t help but give in to the urge to strike a pose of my own. 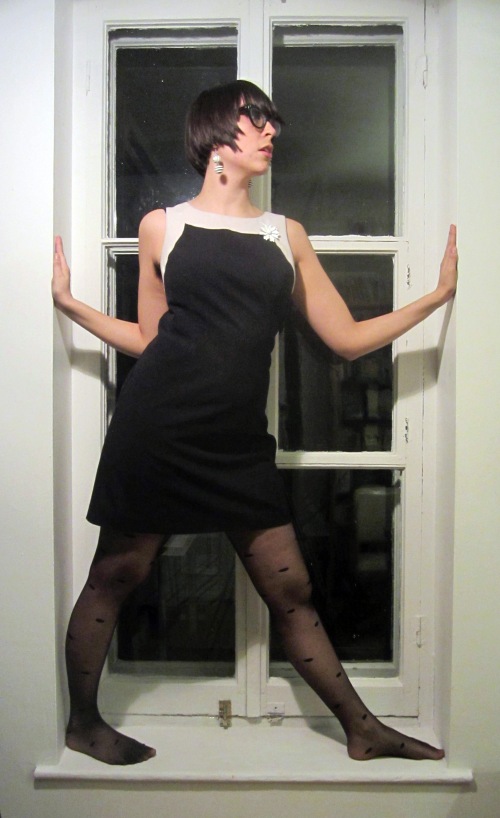 I leave you with some recommended watching:

Wish me luck in my quest for the perfect bob…