I reminisce that I was once a novelty. A novelty, at least, when it came to the fact that I shared my life on the Internet. I remember, over a decade ago, being the only person with a digital camera at a party in our parent’s basement. I remember the MSN messenger noises that would ping when people asked me when I was going to share the photos they saw me took, the ones they posed for. And I remember Photobucket (or shutterfly, or snapfish, or whatever now defunct photo hosting website I used at the time) crashing from the traffic. The dozen or so teenagers wanting to laugh at the digital photos I had taken only hours earlier, emailing them to the people who weren’t there, look at this, the novelty of the instantaneousness of the thing.

I also remember my sisters asking me after having read my blog, “how can you share so much of yourself with strangers?” The concerned voice of my parents, the emails from strangers about the audaciousness of it all. It felt harmless for the most part, but so good, too. 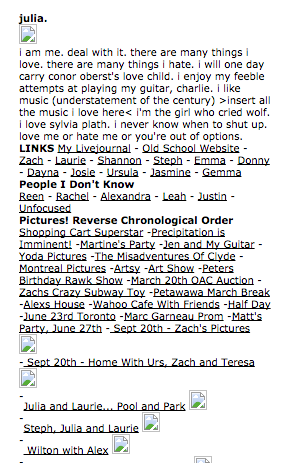 Re-reading those dead blogs now, I can remember the feelings even more vividly, as the heat of embarrassment fades from my face. Fuck, it felt brash, it felt good, it felt original to a certain extent. And it felt necessary.

Things have shifted since then. For me, and for the Internet. Since 2010, at least, I have been joking about being the last of my friends (my generation? insert relevant emoji here) to not have a smart phone, and this remains true today. In recent years, I decided I didn’t want to swim in The Stream, as it had been dubbed. An apt term in many ways, but I often imagined it more as tsunami than a peaceful babbling brook.

I used to blame these factors – no cell phone, nostalgic almost luddite-leaning tendencies – for the disconnect. How maddening it is for me to try and understand virality as a measure of merit or quality, the thinkpieces… if you could call such thoughtless things something with the word think in the title, the megaphones for the masses which instead of fostering fruitful discussions often felt like a cacophony of idiocy. I would find solace in the idea that maybe I just didn’t “get it” because the Beast of the Internet had grown and evolved so much, and because my online habits, in many ways, hadn’t. I worried that maybe I had become the curmudgeon, shaking his fist at a screen because it didn’t reflect him, his face, his ideas, his values or beliefs.

Image by Oliver Munday for the New Yorker

Whereas I once felt like I was the first of my IRL friends to be on X platform (myspace, friendster come to mind), now I feel late to the party. Late to a party I wasn’t invited to, yet still I often found myself feeling beholden, obliged.

I didn’t like where I saw the Internet going, how I saw it being transformed as a tool. But I’m hardly above it all, and had grown so dependent.

So I shifted. I put my guard up. I succumbed, in many ways, to what is expected of online behaviour. I resisted in others. I typed out – and swiftly deleted – status updates about food or cats or overly emotional moments (positive and negative). I shared fewer and fewer of the thousands of photographs I take.

This is what I read, what I liked.

This is an image that strikes me, that I want to reblog.

This is a song that moves me, here are the lyrics (I needed this, I often say).

Here, here is a like or heart or a favourite to let you know I am reading, I am watching, I am here.

2014 is easily the year I shared the least of myself online. The fewest photographs, the lowest word count, the least personal. I measure this idea, this “sharing” of myself online, mostly in the public sense – the things I shared open and accessible to anyone who wants to see them. But the same could be said of the amount of emails sent, photos shared within smaller, more personal networks. (I was shocked to find I had only uploaded 36 photos from the year on Flickr, and those, namely for a dear friend who lives halfway across the country and doesn’t use Facebook.)

This is the one thing that stands out to me, that creates a gulf, a rift, between all the other years I’ve stepped back from and taken the time to reflected on online. The lack. How hard it is to piece it all together, to map it out.

In past years, every December, I would spend hours poring over old livejournal or blogger entries, back when I used to write in my livejournal at least once (ONCE!) a day. It was a simple one stop shop for me. Not today. Today it is five or six tabs open, it is instagram/twitter/tumblr/facebook/soundcloud/etc. It is work email accounts, it is split personalities. Livejournal instead feels like a graveyard now. Mine, filled with the names of friends I no longer know, photographs of old lovers, the corpses of questions I asked myself, I asked out loud that have since been answered. In this, I am not alone. It has felt like a graveyard to many twenty somethings for more than half a decade now, so much so that we often joke about it on newer social media platforms, using hashtags, a tool that did not exist back when we used to email each other invite codes to create our very own novelty livejournal accounts.

These are among the multitude of things that struck me as I tried to map out 2014.

No, these feeling of not being able to/not wanting to keep up are not new.

But the feeling of repetitiveness, of sameness, of lost novelty, is.

Sometimes I feel complicit. Complicit in the self-serving navel-gazing break-neck speed at which the Internet whirrs these days. The term “digital native” has dropped out of view but I think of how it felt like me, like a key aspect of my identity even though I’m not technically part of that generation. Sometimes I step back and look at the long term impact of the way the Internet has changed the way we communicate, the way we work, and how we are paid for that work. And when I do, I feel like I’m part of the machine, the same machine mocked by these satirical pieces.

I find solace in the way Jes Skolnik puts their finger on it here, articulating some of my apprehensions:

I am exhausted by clickbait media seeking to capitalize on the frustration of the marginalized by churning out thinkpieces (by often-terribly-paid freelancers, the labor exploitation of which is its own thing and has been elegantly written about by many; it is a seriously complicated issue, as any labor issue is, particularly in this economic context) which we are urged to share over and over until the next incident happens and then we share and share until we forget about the last thing and nothing gets solved. It is only reactive, only consumer-based (see: why talking about what cultural product is or isn’t feminist is exhausting too) and very little structural inequity often gets challenged.

Hearing someone else say it feels like a weight off my shoulders.

These reflections were all spurred on by the daunting task that has been looming these past few weeks: tomorrow’s year in review, recommended reading, which songs I was listening to. This ends up being more of a digital version of a diary, a filtered one but very diary-esque in spirit. This is what happened, these were the images and sounds and ideas I consumed, but this is how I felt, this is who I was, as well.

Selectively filtering through, pinpointing the things I want to remember and hold on to. Even though the links will die, the digital platforms they are hosted on will decay. Unendingly nostalgic Julia wants to remember, reminisce, before things have even ended/happened.

What was new about 2014? What did I learn that I didn’t know before? At this distance, my nose still pressed against the glass, my head groggy from lack of sleep, it all feels like a foggy mess. When moments do come into view, when I look at images of police officers wearing shirts that read “I can breathe” – oblivious to the physical and psychological violence they enact – when I read about the most underreported horrors of the year… it all feels the same. Déjà-vu broken record cliché as fuck the same. The propaganda machine, distractify, how the social media sites feel even more effective at the spin of it all than old posters and radio broadcasts. The world is an awful place but a place where I have to live just the same. The sameness.

It makes me angry that the same issues, the same stories, the same dead bodies are the ones that stand out to me about this year. In August, I tweeted that this essay “broke my heart and haunted my dreams.” Sometimes I feel like that’s what the world did to me this year. By the same token, though, I rediscovered rage. The power of it, the empowerment of it. Rage expressed in music with voices like Perfect Pussy, New Fries, Run the Jewels. Rage expressed in art, in a rambling email to your best friend, in an essay you boldly share with millions of strangers on the Internet.

It’s all a balance, right?

Earlier this week, Nathan Jurgenson tweeted this which put some of this mess in perspective:

In my own attempt at slowing the blur, focusing in, some truths have emerged. In 2014, I shared very little of myself online – representations of my visual self. But I did not become cold. I was more frank face to face than I have been in years. I shared, I tried to amplify who was saying it better than I could. I was more intentional. I tried to take more time. I spoke less, I listened more. That’s really not so bad when you look at it.

Hopefully reading this, and tomorrow’s year in review, will make you feel like the world has slowed down just a bit.