over the years, many people (online and off) have asked me who my style icons are. i don’t really like idol/hero/celebrity culture, and so i’ve always managed to avoid answering the question. plus, i always prefered admiring “real people’s” styles, like my friends, as opposed to celebrities i’d never met (who more often than not have a team of stylists orchestrating how they present themselves) and consider my own personal style a mishmash of influences… but! if we re-word it, i can make it work for me. if someone asked me, “which historical figure has had the biggest influence on your taste, style and aesthetics?” there are three or four faces that come to mind.

one of them is louise brooks.

you may not know her name, but you most likely know her face… or at least her trademark bobbed haircut. there is, of course, debate around whether or not silent film stars like colleen moore and louise brooks can be credited as having “started” the trend of the bob, or if they are simply responsible for having popularized an already quite popular hairstyle… but that’s another story.

louise brooks was born in 1906, in cherryvale, kansas. as a young woman, she loved literature, dancing, and the cinema, and soon all three would become major parts of her life. she worked as a dancer before lighting up the silver screen, and after she ended her acting career, she opened her very own dancing studio. as she aged, she continued longstanding letter writing friendships with friends and fans. but that is just a small window into a long, full life. she is probably most remembered for her role as lulu in G.W. Pabst’s 1929 film Pandora’s Box, which also happens to be one of my favourite films.

i could go on and on about her, but i’d rather recommend you watch her films and read up on her yourself. personally, i’ve been smitten with her since i first saw her on the screen when i was in my late teens, and soon after came across barry paris’ biography of her. i wouldn’t quite call it love at first sight, but i quickly realized it was more than her gaze and her face that so entranced me. 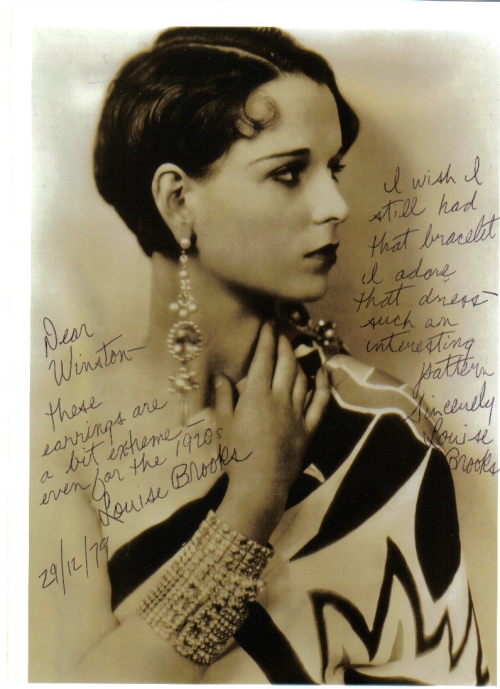 part of the deep fondness i have for louise brooks is that she was such a intelligent, whipsmart, and yes, gorgeous, person… over the course of her entire life. in fact, the most interesting aspect of her, in my opinion, is her life as a whole, not just the short decade in which she was a celebrity. many writers bemoan the fact her acting career was so short lived, but if you hear what she recounted in hindsight in the 60s and 70s, she never sounds bitter or angry about it. hollywood wasn’t a particularly friendly place for outspoken and badass ladies (then, and we could argue even still, today). instead of just moping about it, she lived the rest of her life, opened a dance studio, watched movies, read, and wrote. independent, savvy, passionate, unapologetically sexual, brimming with wisdom and wit. this autographed photo shows a bit of that side of her. signing autographs in 1979 for a picture taken in the 20s, and being nostalgic in a healthy way, all the while acknowledging she was always a bit of a black sheep, a little ahead of the curve.

and that’s why her style, the photographs of her short career, have entranced me so. here are just a few of my favourite louise brooks outfits.

i don’t know what it is, there’s just something about her i’ll always admire and hope to one day emulate myself. maybe it doesn’t need explaining. so obviously, over the years, i’ve tried in vain to emulate brooks. unsurprisingly, i jumped at the first chance i got to do it for others. back in 2007 i participated in amelia raley‘s vintage vivant project. one of the assignments was to take a “star portrait”:

Submit a photo of yourself that mimics a photograph or artwork from 1920 – 1949. Include one portrait of yourself, and the original photo you’ve based your submission on.

it’s not quite perfect, but i’m still pretty proud of how it turned out.

clearly i’m not the only critical fashion lover enamoured with her, either! one of the folks over at the always wonderful WORN journal even shopped up this image of her:

aaaaaaand i’ll leave you with this lovely gif. how can you resist that smirk?