I like music. I enjoy live music. I go to see concerts. I’ve been to more than a few music festivals over the years.

So why is it that every music festival related fashion story makes my blood boil? Why are they all so soaked in vacuous sexist assumptions? Why does every “festival fashion round-up” present a very limited spectrum of body types, and tend to be overwhelmingly female?

I’m thinking about this now because it’s the summer and it is everywhere. Osheaga is kicking off this weekend in Montreal, and here’s just a sampling of headlines:

Link after link, are we really encouraging women and girls to think more about what they look like than about the experience of enjoying music performed live? For real? I’m not surprised by fashion brands hopping on the “female music fan” bandwagon when festival season comes around, but I am dismayed by the tone employed by so many fashion writers.

This isn’t even about telling women how to dress – I really could go on and on about how impractical many of the suggested “looks” are, but that’s not what this is about. For years, I’ve been ranting about the ridiculousness of white girls wearing headdresses (from Halloween costumes to music festival “accessory”) and more recently bindis. But now that it seems we’re slowly starting to be on the same page (see link above) about how shitty those “music festival fashion choices” are, now I’m reminded of the bullshit female music fans have to put up with any time they decide to go to shell out hard-earned cash to go to a music festival.

First things first: you do not have to gender this shit.

If you’re hell-bent on taking photographs of fans at music festivals, include dudes. Better yet, try and reflect the crowd in your selection of 5-10 outfit photos. Are fashion writers, photographers, even considering about how they are representing communities by only highlighting a handful of conventionally attractive tall skinny white girls in their round-ups? The ever-amazing Jes Skolnik mentionned how fat people are rarely ever featured earlier this summer, and it has really stayed with me.

Yearly reminder to festival fashion photographers to include some fatties in your roundups. We, too, look cute as shit (and we have to work harder at it because of how society views chubby/fat bodies as inherently slobby). modernistwitch

But there’s something more that gets under my skin about these “festival fashion round-ups”: it’s one of the exceedingly rare mainstream moments where I see women represented as music fans, included as part of the conversation as music lovers. Why does it have to be all flower crowns and denim cut-offs?

Perhaps it’s because I feel these issues are so conflated with other sexist bullshit that permeates the music industry. Underscored by experiences I’ve had as a teenager who started going to punk rock shows at 15, 16, and never really wondering why I wanted to dress like the boys, meld in with the boys, to be seen as anything other than a girl. Because I knew what being seen as a girl could mean. Maybe it’s because I’ve been, and I’ve known many other young women, who have been sexually harassed at shows. Maybe it’s because I took to wearing steel-toed boots, not because of how they looked, but because it made me feel like I had a weapon on my feet if the wrong guy decided to touch me the wrong way, again and again, in the mosh pit. Maybe it’s because I’ve overheard one too many bro dudes tell me how the band on stage is “pretty good… for a girl band.” Maybe it’s because I’ve read one too many concert review which spilled far more ink on how a female performer was dressed rather than how she played her instrument, how she sang her songs, how she connected with the crowd.

Now that I’m older I care less. I care less about what people might assume about me, about my knowledge of bands because I don’t wear band t-shirts, because I don’t look like I would have band x in my record collection. I care less, mainly because of the people I surround myself with. I’ve made really great friends – hell, I even met the love of my life in line for a concert I impulsively went to by myself. Because it’s easy to make friends when you’re there because you genuinely want to be there. I don’t go to music festivals to socialize, to impress strangers, I go to enjoy live music, to support the artists who tour their butts off, and to have fun. 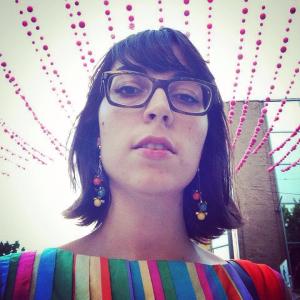 Just last month, I ended up at the wrong venue in a city I still manage to get lost in even though I’ve visited more than a dozen times. Instead of at La Tulipe to go see Sylvan Esso and tUnE-yArDs, I ended up faced by a long line of mostly tall lanky long-haired white dudes dressed in all black. The clock was ticking and I realized I was at the wrong venue, but briefly debated going to see Xiu Xiu and Swans instead. As I was getting my bearings, I overheard one of the men in the crowd say “Someone’s lost.” It might have had nothing to do with how I was dressed. It probably had more to do with the bewildered, slightly frantic look on my face as the feeling of being lost sunk in. But it felt like a jab. It felt like a judgement, an assumption about what kind of music I would go to see live… because I was a girl in a dress.

It was a reminder, though, that even though I don’t particularly care, I’m lucky because I don’t have to care. I’m privileged not just because of my size and gender, my confidence and my friends, but because of where I live. Because the music scene I’m a part of in Quebec City is really exceptional. Because the music scene I used to be a part of in Peterborough was pretty awesome too. Because I don’t have to worry about being harassed or touched without permission in a concert crowd. Because there are festivals and off-shoots run by badass people who think about gender diversity in their programming, on their stages, and in their crowds. Because my record store is co-owned by a cool couple who never make me feel like they are judging me when I go up to the cash register with my choices. 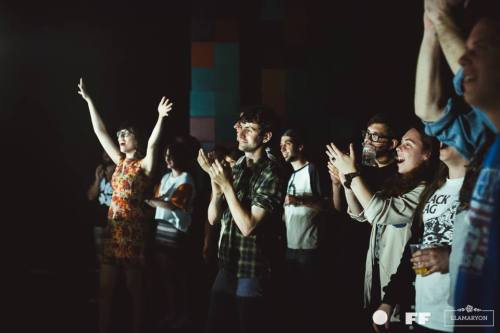 I found myself reflecting on that privilege I have after I saw this photograph Maryon Desjardins took of me, as Viet Cong wrapped up their set at Festival OFF. I didn’t know there was a camera there. I didn’t know someone had taken a photograph. And when I saw it, I loved seeing the look on my face. Remembering the feeling of that long drawn out song, the jangling guitars, the intensity of the room. Remembering that I went to this show by myself, who cares, because I wanted to see good live music and it was so fucking good and you can see how good I thought it was because I’m there, in the moment. And it was a reminder that I live in a place where I’m lucky enough to do that without worrying about what people might think of what I’m wearing, or far more importantly, worrying about my physical safety.

It strikes me more when I’m online, when I see these click-bait garbage lists over and over. It makes me worry about the young girl I used to be, the young people not entirely unlike the person I used to be, insecure and thirsting for community, for something to give them a sense of purpose, peppered in small towns around the world. It makes me worry about the young people whose access to music and the communities that build around them are limited or filtered by what they can find online. I worry they might think there’s only one way of looking like a music fan, and it involves wasting your money on destructive fast fashion.

Can we stop this ridiculously reductive way of speaking to young female music fans? I want to be part of a music scene that fosters, encourages, and creates spaces for young women, for diversity, for accessibility, for safe spaces. No one should be left feeling like they have something to prove. I shouldn’t envy the experiences of so many of my straight male friends who get to go to shows, be as enthused or unenthused as they want to be, without wondering if people are making assumptions about their knowledge or taste in music based solely on their gender or race or size or style.

Why waste our time with these stupid lists every festival season; let’s invest our time in more worthwhile battles. What are some of the festivals with the highest rates of gender diversity on stages and in the crowds? How do we create cultures at music festivals where we are working to prevent harassment, rape, and offering resources and support to people who find themselves in unsafe situations? What are some of the music festivals that make diversity part of their mandate? What are some of the most wheelchair accessible outdoor music festivals in the world? Who are the singers, the activists, the guitarists pushing for fostering creative spaces for growth and expression through music, like rock camp for girls? How do we empower young music fans to create the kind of music scenes they want to be a part of, instead of encouraging them to spend money on clothes for a 3-day music festival that will hopefully be more memorable because of the amazing music you got to hear?

So thank you to the people who smash this shit down on the daily. Thanks to the people writing about the latent sexism present in a plethora of music scenes. Fuck your condescending capitalist bullshit disguised as festival fashion tips. I’ll save my money for the merch table instead of your shitty magazine.